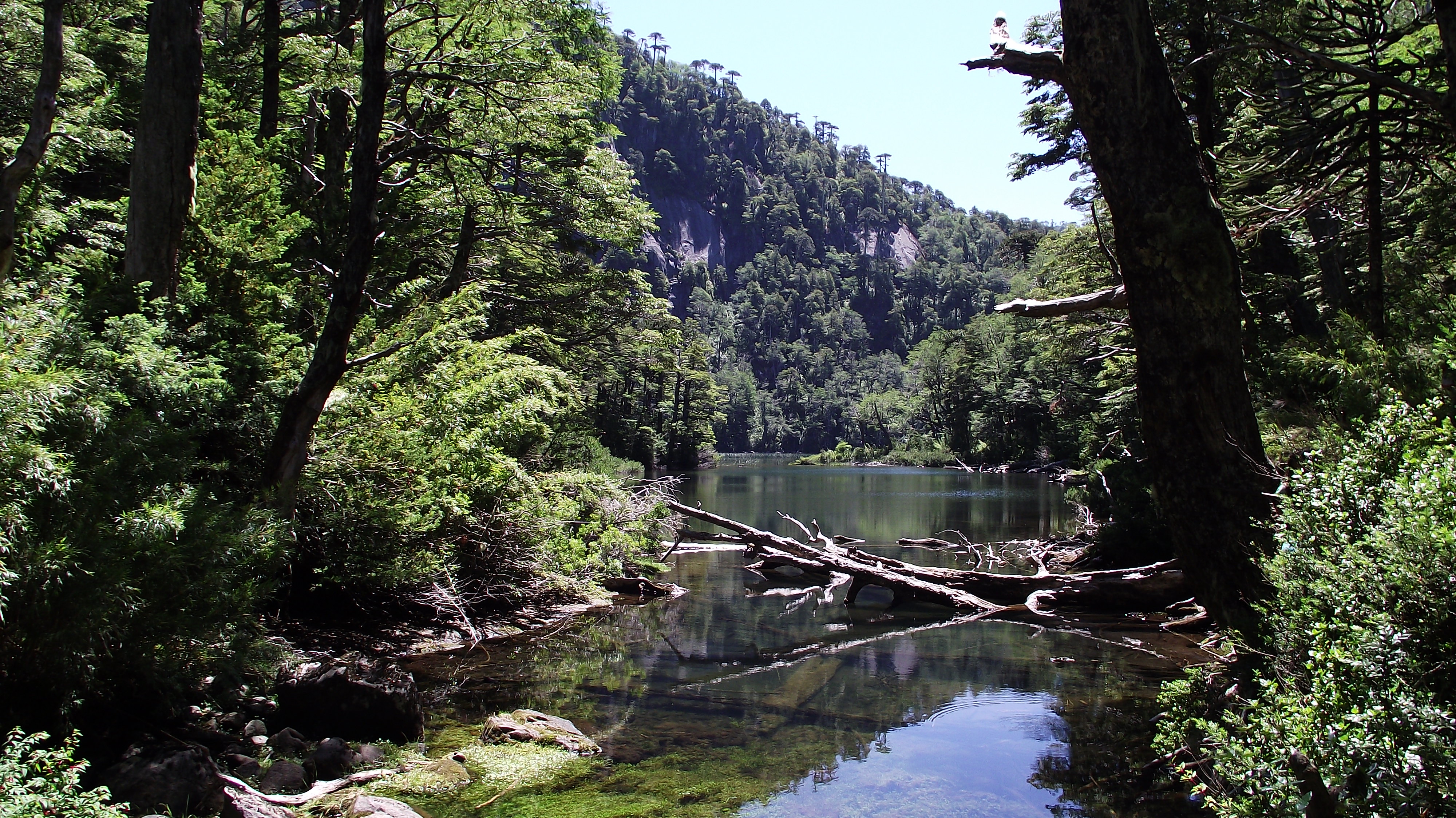 I am an Assistant Professor in the Department of Economics at the W. P. Carey School of Business at Arizona State University. I am an Applied Economist working on Empirical Market Design, Education Economics, and Labor Economics. I broadly study market design policies in practice in the context of matching markets. My current research focuses on how dynamic considerations and imperfect information can affect the design of matching markets, change the performance of assignment mechanisms used in many countries worldwide, and impact agents' outcomes.

We study the relevance of incorporating dynamic incentives and eliciting private information about students’ preferences to improve their welfare and down-stream outcomes in centralized assignment mechanisms. Using administrative data and two nationwide surveys, we identify that two behavioral channels largely explain students’ dynamic decisions: (i) initial mismatches and (ii) learning. Based on these facts, we build and estimate a structural model of students’ college progression in the presence of a centralized admission system, allowing students to learn about their match-quality over time and re-apply to the system. We use the estimated model to analyze the impact of changing the assignment mechanism and the re-application rules on the efficiency of the system. Our counterfactual results show that policies that provide score bonuses that elicit information on students’ cardinal preferences and leverage dynamic incentives can significantly decrease switchings and increase students’ overall welfare.

We analyze the prevalence and relevance of application mistakes in a seemingly strategy-proof centralized college admissions system. We use data from Chile and exploit institutional features to identify a common type of application mistake: applying to programs without meeting all requirements (admissibility mistakes). We find that the growth of admissibility mistakes over time is driven primarily by growth on active score requirements. However, this effect fades out over time, suggesting that students might adapt to the new set of requirements but not immediately. To analyze application mistakes that are not observed in the data, we design nationwide surveys and collect information about students’ true preferences, their subjective beliefs about admission probabilities, and their level of knowledge about admission requirements and admissibility mistakes. We find that between 2% - 4% of students do not list their true most preferred program, even though they face a strictly positive admission probability, and only a fraction of this skipping behavior can be rationalized by biases on students’ subjective beliefs. In addition, we find a pull-to-center effect on beliefs, i.e., students tend to attenuate the probability of extreme events and under-predict the risk of not being assigned to the system. We use these insights to design and implement a large-scale information policy to reduce application mistakes. We find that showing personalized information about admission probabilities has a causal effect on improving students’ outcomes, significantly reducing the risk of not being assigned to the centralized system and the incidence of admissibility mistakes. Our results suggest that information frictions play a significant role in affecting the performance of centralized college admissions systems, even when students do not face clear strategic incentives to misreport their preferences. 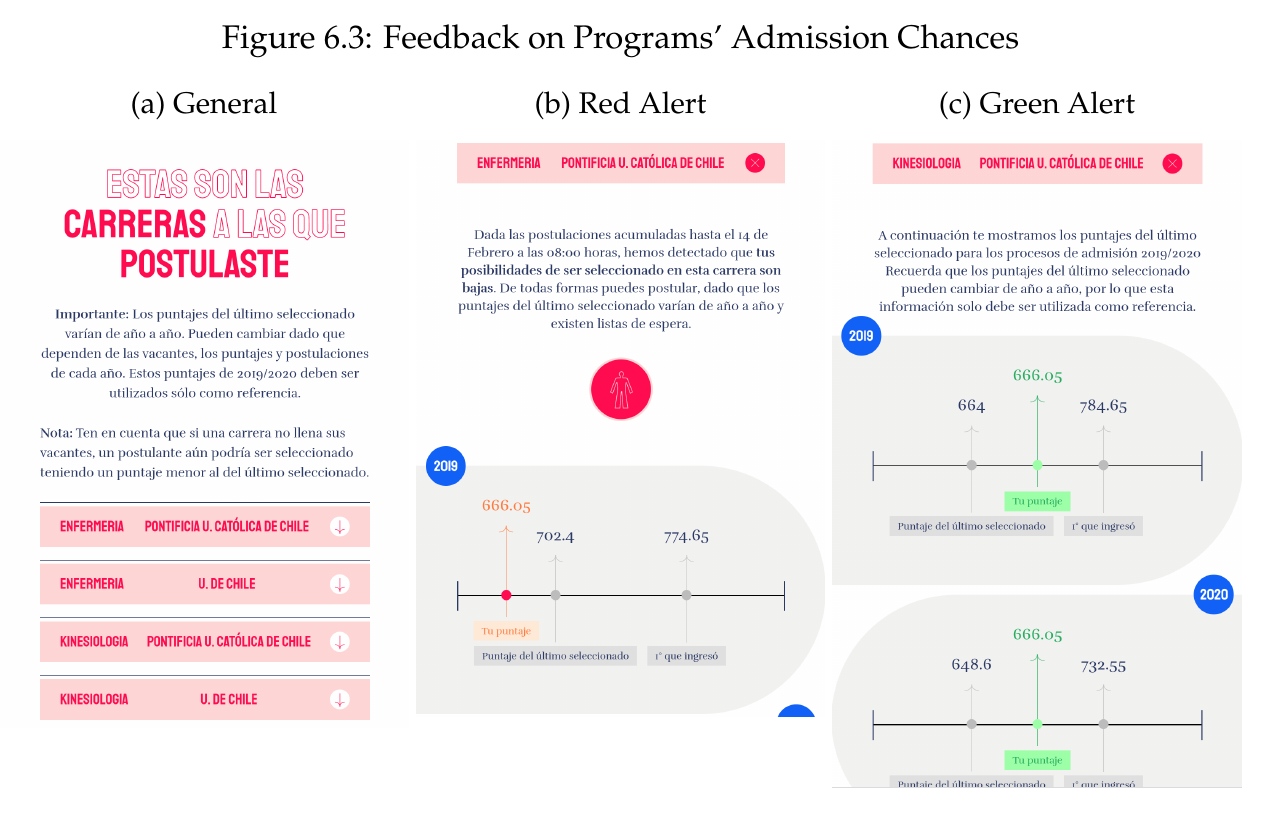 Do “short-list” students report truthfully? Strategic behavior in the Chilean college admissions problem, with I. Ríos. Presented at Mip (2018) and NAMES (2019). [See paper]

We analyze the application process in the Chilean College Admissions problem. Students can submit up to 10 preferences, but most students do not fill their entire application list ("short-list"). Even though students face no incentives to misreport, we find evidence of strategic behavior as students tend to omit programs for which their admission probabilities are too low. To rationalize this behavior, we construct a portfolio problem where students maximize their expected utility given their preferences and beliefs over admission probabilities. We adapt the estimation procedure proposed by Agarwal and Somaini (2018) to solve a large portfolio problem. To simplify this task, we show that it is suficient to compare a ROL with only a subset of ROLs ("one-shot swaps") to ensure its optimality without running into the curse of dimensionality. To better identify the model, we exploit a unique exogenous variation on the admission weights over time. We find that assuming truth-telling leads to biased results. Specifically, when students only include programs if it is strictly profitable to do so, assuming truth-telling underestimates how preferred selective programs are and overstates the value of being unassigned and the degree of preference heterogeneity in the system. Ignoring the constraint on the length of the list can also result in biased estimates, even if the proportion of constrained ROLs is relatively small. Our estimation results strongly suggest that "short-list" students should not be interpreted as truth-tellers, even in a seemingly strategy-proof environment. Finally, we apply our estimation method to estimate students' preferences for programs and majors in Chile and find strong differences in preferences regarding students' gender and scores. 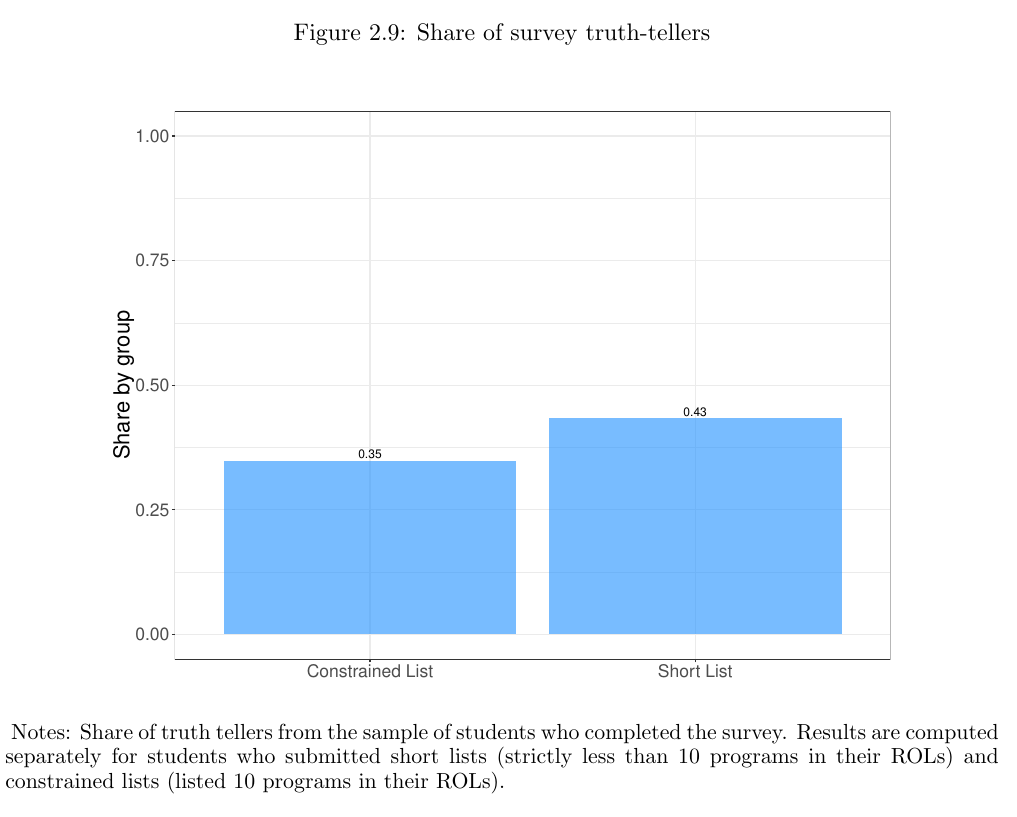 Application Mistakes and Information frictions in College Admissions: a Structural Approach , with A. Fabre, C. Neilson, and I. Rios.

The Effect of Automation on the U.S Labor Market under the Affordable Care Act , with H. Fang, and A. Shephard.

The Effect of Automation on the U.S Labor Market under the Affordable Care Act

We analyze the effect of automation on the US labor market under the Affordable Care Act (ACA). We build an equilibrium model of firms' technology choices in an Employer-based Health Insurance economy. We calibrate the model for the US economy and evaluate the effect of the automation wave under different labor market regulations on labor market outcomes and health-insurance coverage. Our preliminary results show that the Employer mandate shifts the distribution of low-skill contracts without health insurance towards less complex tasks. This shift slightly amplifies workers' displacement by automation technologies and significantly increases the health-insurance coverage of low-skill workers than the pre-ACA economy.

We analyze theoretically and empirically the role of multi-stage Dutch auctions with bid increments (Hybrid-Dutch) that used for selling non-performing assets in Ukraine. The design was motivated by a concern that the original design (sealed bid first price) discouraged the participation of "outsiders" and did not provide sufficient incentives to "insiders" to reveal information. We build a stylized model of bidders with asymmetric information (insiders) and characterize the equilibrium of the Hybrid-Dutch auction. Our preliminary results show that Hybrid-Dutch auctions can increase efficiency and participation when insiders are present, relative to First-price sealed-bid auctions.

In this paper we present the design and implementation of a new system to solve the Chilean college admissions problem. We develop an algorithm that obtains all stable allocations when preferences are not strict and when all tied students in the last seat of a program (if any) must be allocated, and we used this algorithm to determine which mechanism was used to perform the allocation. In addition, we propose a new method to incorporate the affirmative action that is part of the system and correct the inefficiencies that arise from having double-assigned students. By unifying the regular admission with the affirmative action, we have improved the allocation of approximately 3% of students every year since 2016. From a theoretical standpoint, we introduce a new concept of stability and we show that some desired properties, such as strategy-proofness and monotonicity, cannot be guaranteed under flexible quotas. Nevertheless, we show that the mechanism is strategy-proof in the large, and therefore truthful reporting is approximately optimal.

Effect of Including High-School Grades Rank in the Admission Process to Chilean Universities, with A. Mizala and I. Ríos, in Pensamiento Educativo, 52 (1), 95–118, 2015. [See paper] 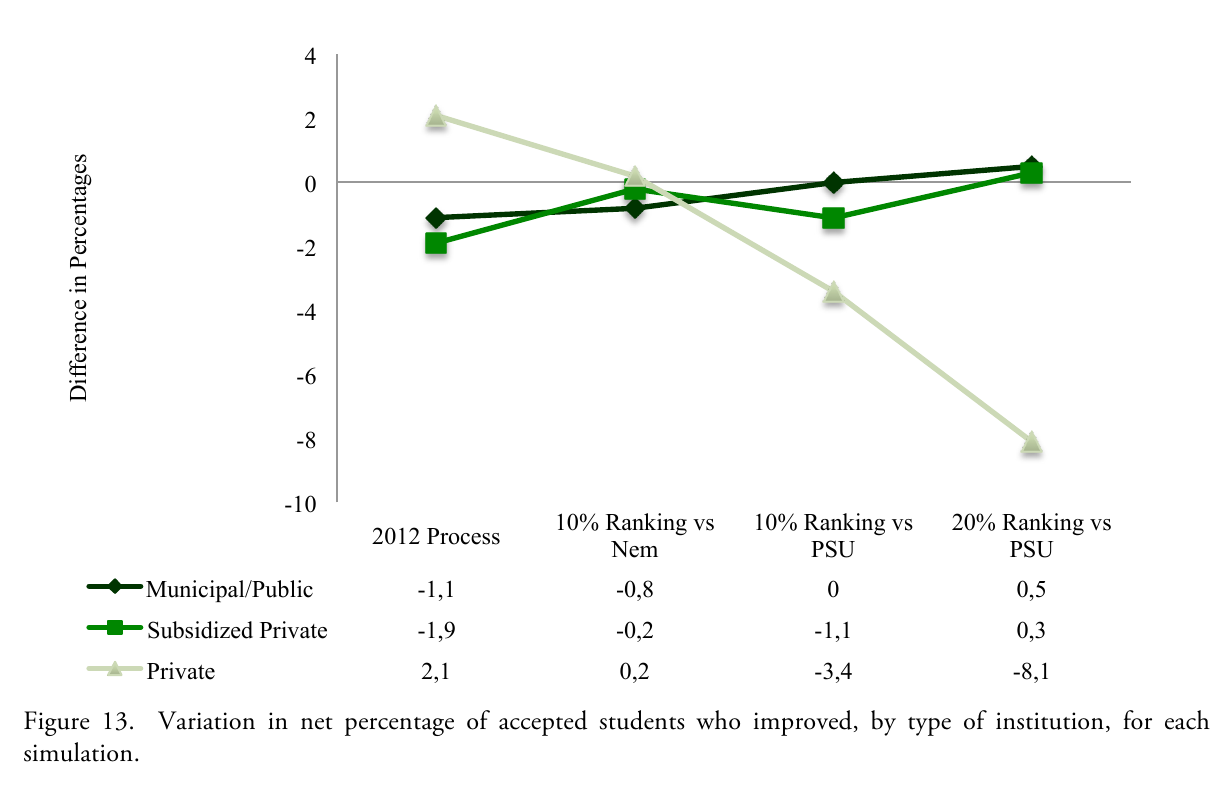 Hunter-gatherers maintain assortativity in cooperation despite high-levels of residential change and mixing.

Widespread cooperation is a defining feature of human societies from hunter-gatherer bands to nation states , but explaining its evolution remains a challenge. Although positive assortment of cooperators is recognized as a basic requirement for the evolution of cooperation, the mechanisms governing assortment are debated. Moreover, the social structure of modern huntergatherers, characterized by high mobility, residential mixing, and low genetic relatedness, undermines assortment and adds to the puzzle of how cooperation evolved. Here, we analyze four years of data (2010, 2013, 2014, 2016) tracking residence and levels of cooperation elicited from a public goods game in Hadza hunter-gatherers of Tanzania. Data were collected from 56 camps, comprising 383 unique individuals, 137 of whom we have data for two or more years. Despite significant residential mixing, we observe a robust pattern of assortment that is necessary for cooperation to evolve; in every year, Hadza camps exhibit high between-camp and low within-camp variation in cooperation. We find little evidence that cooperative behavior within individuals is stable over time or that similarity in cooperation between dyads predicts their future cohabitation. Both sets of findings are inconsistent with models that assume stable cooperative and selfish types, including partner choice models. Consistent with social norms, culture, and reciprocity theories, the strongest predictor of an individual’s level of cooperation is the mean cooperation of their current campmates. These findings underscore the adaptive nature of human cooperation—particularly its responsiveness to social contexts—as a feature that is important in generating the assortment necessary for cooperation to evolve.

We study an extension of the classical college admission problem where applicants have strict preferences but careers may include ties in their preference lists. We present an algorithm which enables us to find stable assignments without breaking ties rules, but considering flexible quotas. We investigate the properties of this algorithm -- stability, optimality -- and we show that the resulting algorithm is neither monotone nor strategy-proof. The mechanism is used to solve real instances of the Chilean college admission problem. Among our results, we show that the welfare of students is increased if flexible quotas and a student-optimal assignment are combined. Finally, we argue why such assignment may be desirable in the Chilean context.

Master in Management and Public Policies